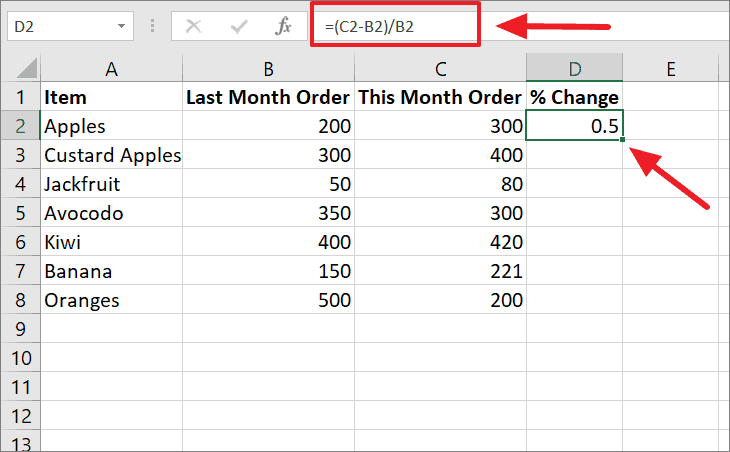 If you work with numbers a lot in your daily work, you will often need to calculate percentages. Excel makes this really easy by helping you calculate different types of percentages using various formulas and methods. Calculating percentages in an Excel sheet is similar to calculating in school math papers, it is very easy to understand and use.

Calculating the percentage change between two values ​​is an easy task. You just need to find the difference between two numbers and divide the result with the original number.

There are two different formulas you can use to calculate the percentage change. Its syntax is as follows:

For example, you ordered a certain amount of fruit last month, and this month you ordered more than you ordered last month, you can enter the following formula to find the percentage difference between the two orders:

The result is not yet formatted as a percentage. To apply percentage formatting to a cell (or a range of cells), select the cell(s), then click the ‘Percent Style’ button in the Number group on the ‘Home’ tab.

The decimal value will be converted to a percentage. 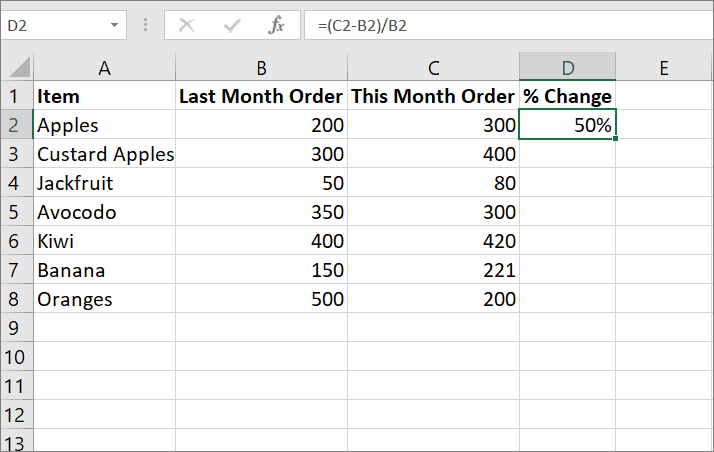 Calculate the percentage change between two columns of numbers

To do that, click the fill handle (the little green square in the bottom right corner of the cell) of the formula cell and drag it out to the rest of the cells. 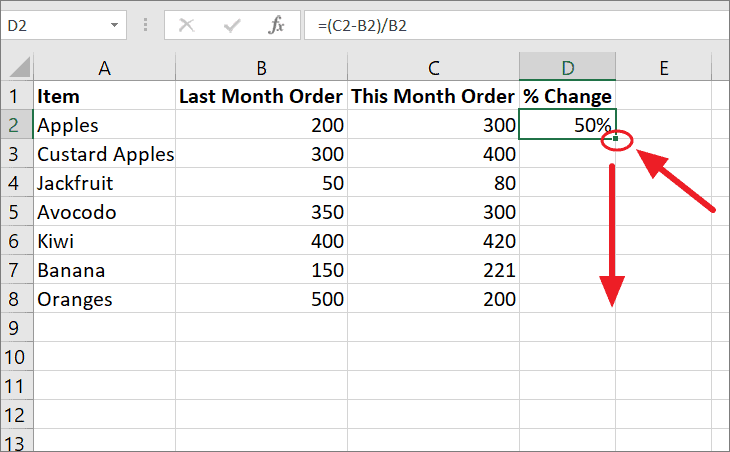 You now have the percentage change values ​​for two columns. 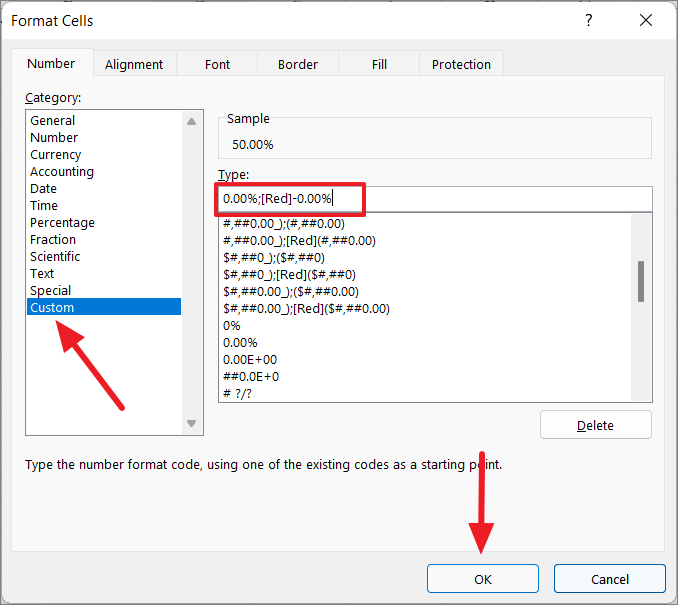 As you can see, the percentage change for ‘Apples’ increases by 50%, so the value is positive. The percentage of ‘Avocodo’ is reduced by 14%, so the result is negative (-14%). 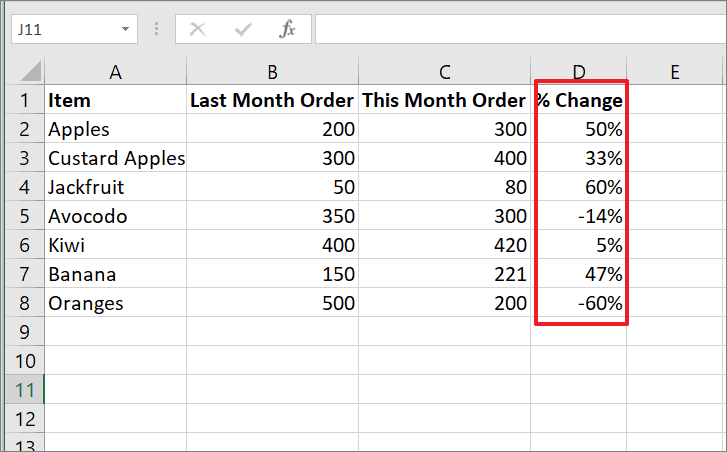 You can also use a custom format to highlight negative percentages in red so they can be easily identified when you search for them.

To format cells, select the cells you want to format, right click and select the ‘Format Cells’ option. 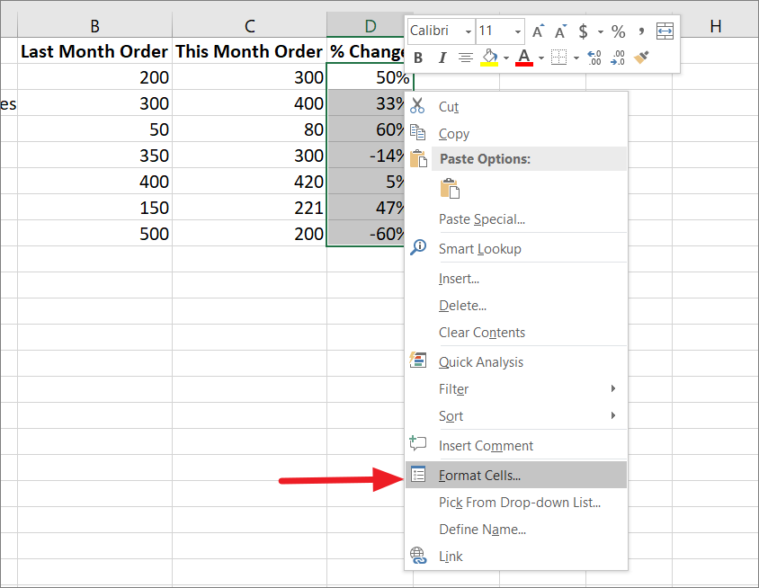 In the Format Cells window that appears, click ‘Custom’ at the bottom of the left menu and type the following code into the ‘Type:’ text box:

Then click the ‘OK’ button to apply the format.

Negative results will now be highlighted in red. Also, this format increases the number of decimal places to display accurate percentages. 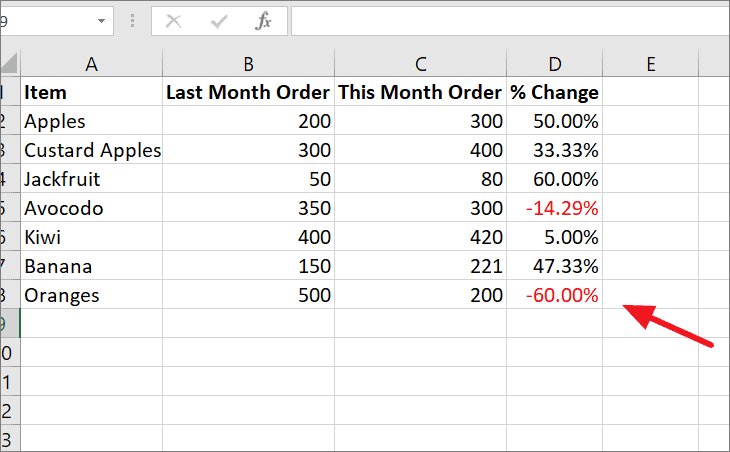 You can also use another formula to calculate the percentage change between two values ​​(Last Month’s Order and This Month’s Order):

This formula divides the new value (C2) by the original value (B2) and subtracts ‘1’ from the result to find the percentage change. 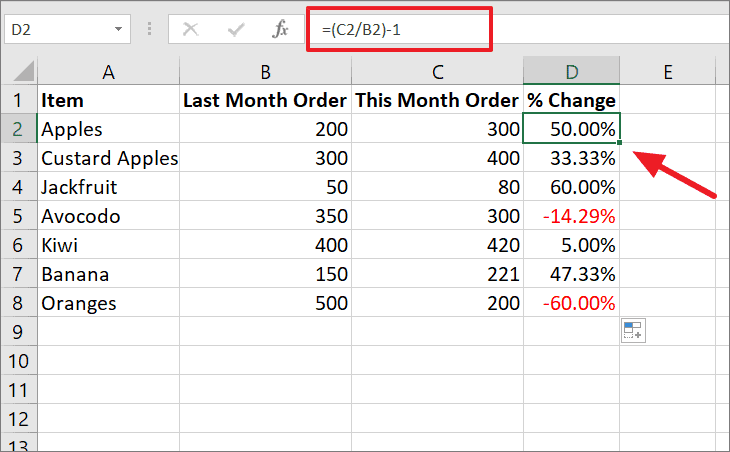 Calculation of percentage change over time 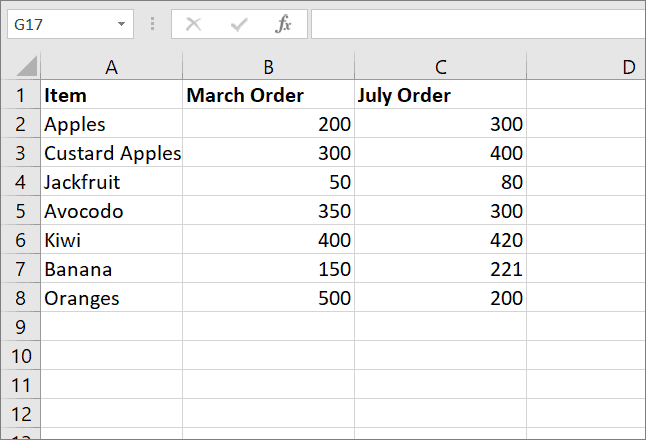 Use this generic formula to find the percentage change over time:

Here, N represents the number of periods (years, months, etc.) between the two values ​​of start and current.

For example, if you want to understand the rate of inflation or deflation in prices for each month for more than 5 months in the example above, you can use the following formula:

This formula is similar to the formula we used before, except we need to divide the percentage change value by the number of months by two months (5). 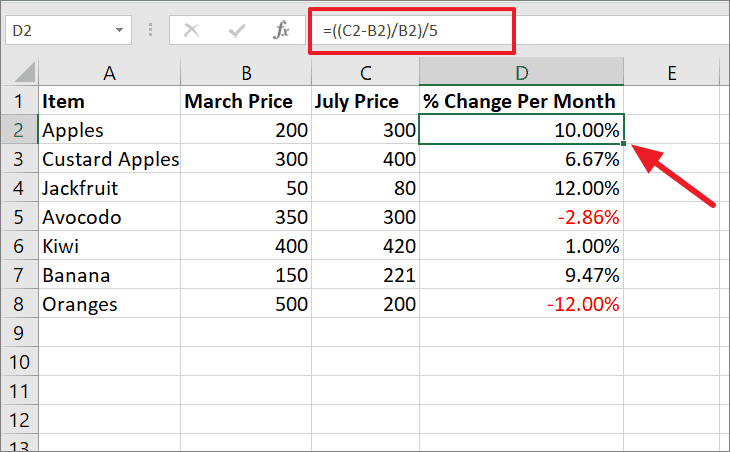 Calculation of percentage growth/change between rows

Suppose you have a column of numbers that lists the monthly price of gasoline for more than a year. 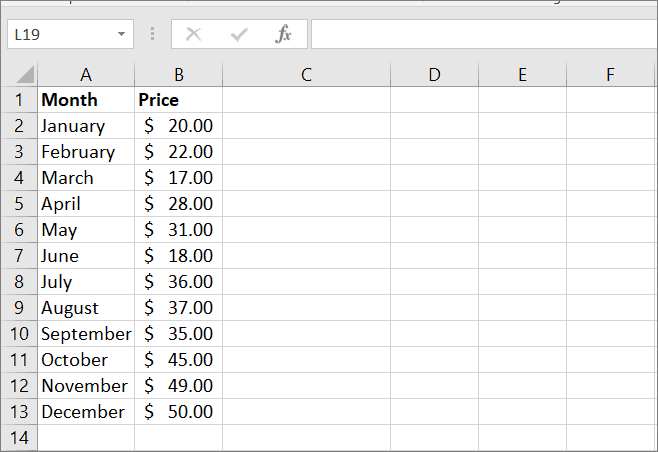 Now, if you want to calculate the percentage of growth or decrease between rows so that you can understand the price changes from month to month, try the following formula:

Since we need to find the percent growth for February (B3) from the price in January (B2), we need to leave the first row blank because we are not comparing January to the previous month. Enter the formula in cell C3 and press Enter. 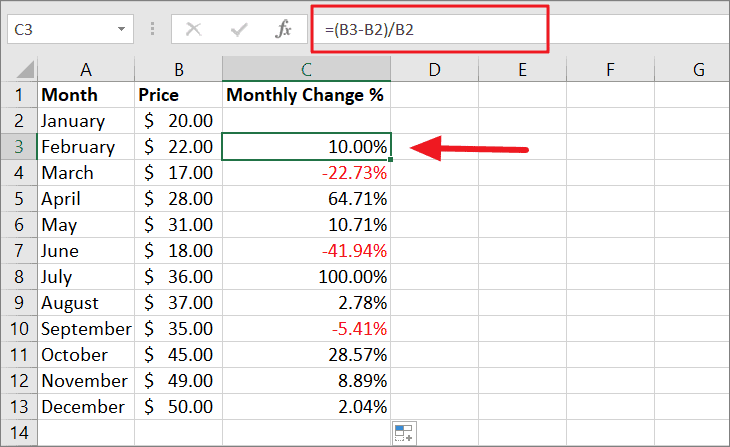 Then copy the formula to the rest of the cells to determine the percentage difference between each month.

You can also calculate the percentage change for each month compared to January (B2). To do this, you must make that cell an absolute reference by adding the $ sign to the cell reference, for example, $C$2. So the formula would look like this:

As before, we skip the first cell and enter the formula in cell C3. When you copy the formula to the rest of the cells, the absolute reference ($B$2) doesn’t change, while the relative reference (B3) will change to B4, B5, etc. 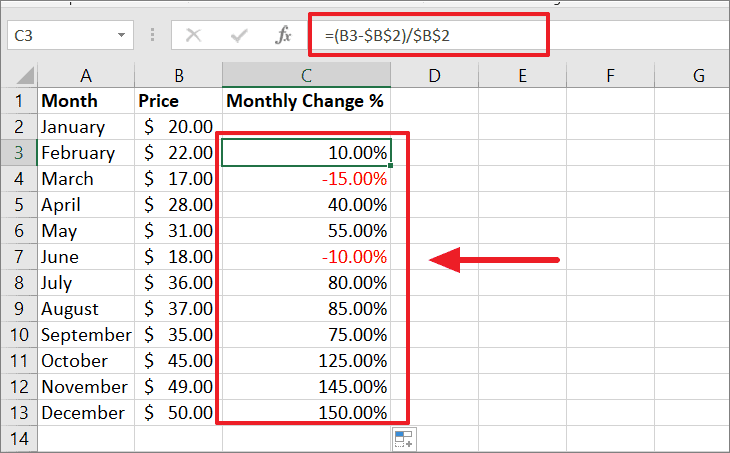 You will get a percentage rate of inflation or deflation for each month compared to January.

Calculation of percentage increase in Excel

All you have to do is subtract the original (first) number from the new (second) number and divide the result by the original number.

For example, you have a list of invoices and their amounts for two months (April and May). If your bills for the month of April increase in the month of May, what is the percentage increase from April to May? You can use the following formula to find out: 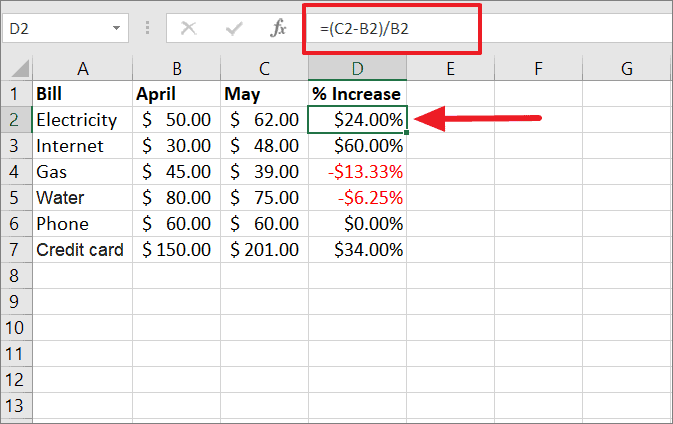 Calculation of percentage decrease in Excel

The formula is almost identical to the percentage increase calculation, except that it subtracts the original value (first number) from the new value (second number) before dividing the result by the original value. 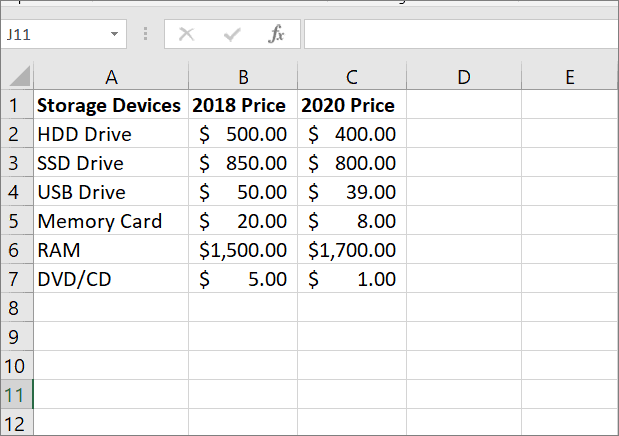 For example, prices for storage devices were higher in the year 2018 and prices decreased in the year 2020. What is the percentage decrease in prices for 2020 compared to 2018? You can use this formula to find out:

Here, we subtract the 2018 price (B2) from the 2020 price (C2) and divide the sum by the 2018 price. We then copy the formula to other cells to find the percent decrease for other devices. 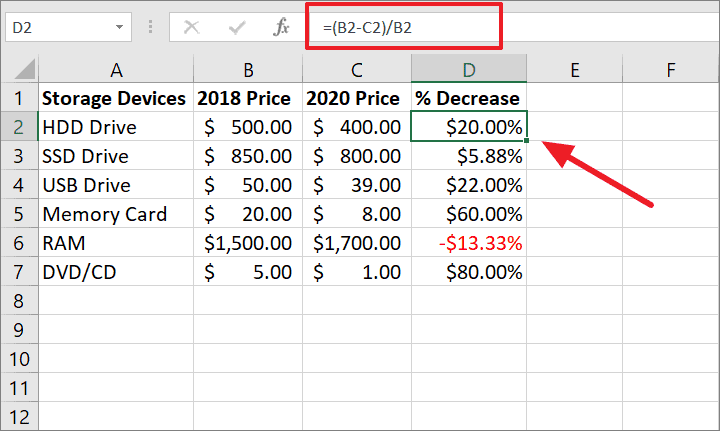 Common errors you get when using the above formulas

When using the formulas above, you may occasionally come across this list of common errors: 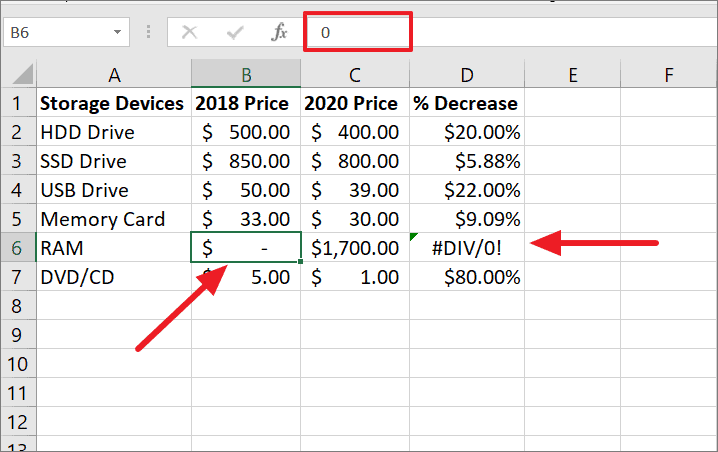 When you enter ‘zero’ in currency format, it will be replaced by a hyphen (-) as shown above. 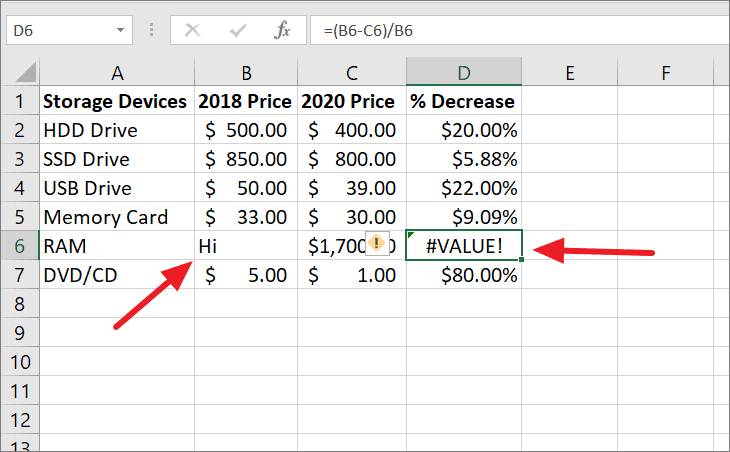 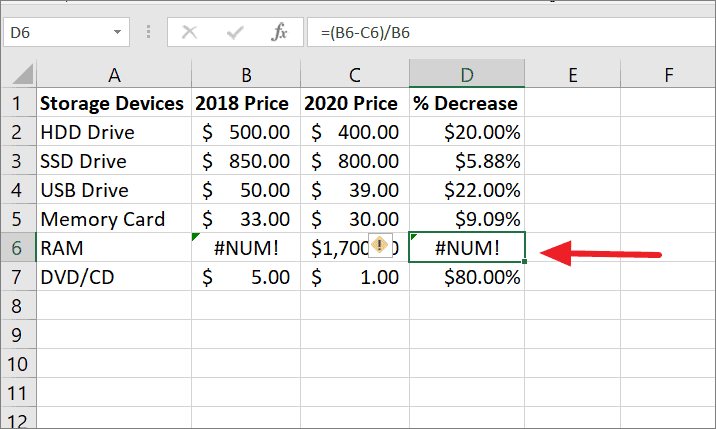 Convert an error to zero

But there is a way we can get rid of these errors and display ‘0%’ instead when the error occurs. To do this, you must use the ‘IF.ERROR’ function, which returns a custom result when a formula fails.

Let’s apply this formula to one of the error examples (error #DIV/0!): 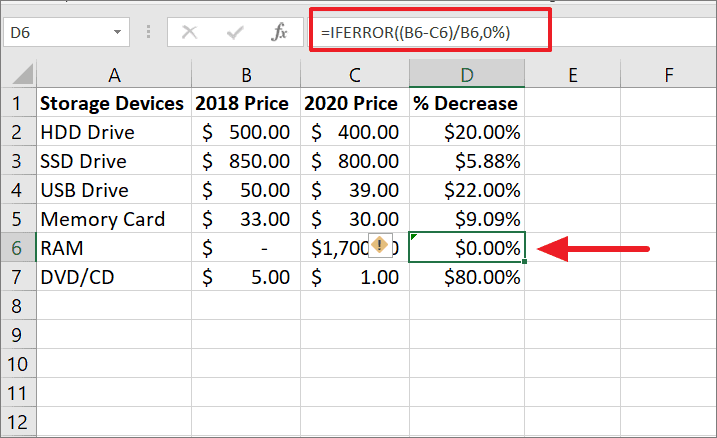 That’s all you need to know about how to calculate percentage change in Excel.

Previous post ▷ What is Windows MiniOs and what are its features? 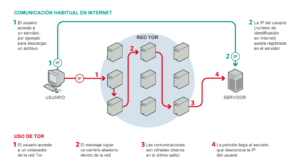